The construction industry is going through a lot of changes.

The pace of change won’t slow down in the near future and no one can predict exactly what all those changes will be.  The contractors that dominate tomorrow’s market will be those that have built strong capabilities for identifying opportunities or problems then rapidly making lasting changes throughout the organization. 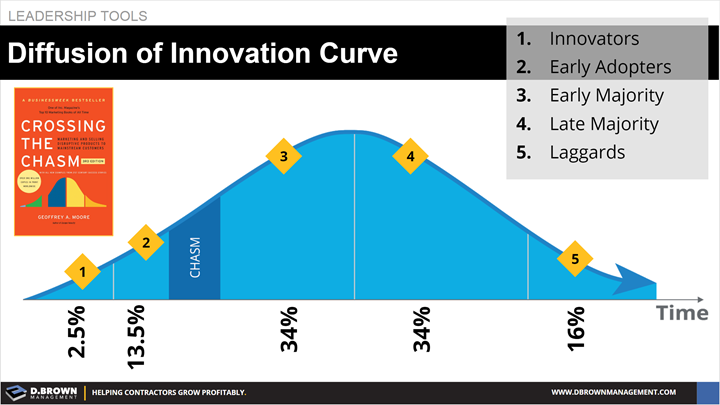 It is worth studying the “Diffusion of Innovations” theory which explores how, why, and at what rate new ideas and technology spread.

Basically any group is broken up into five broad categories:

What are the 3 most important changes you need to make in your company?

Have you mapped out where the people involved fall on the curve?

Lead Measures and Outcomes: Starting with the Schedule of Values (SOV)

It is nearly impossible for a contractor to have consistently great cash flow if they have a Schedule-of-Values (SOV) that isn’t loaded properly and integrated with the project schedule, including a projection of the cash flow.
Related Article

Few things will enhance performance faster than deliberate practice, a rigorous feedback loop and enough cycles to build the competency. Here are the common challenges most people face.
Related Article

CMAR vs DBB in the Process

To see how the Construction Management at Risk (CMAR) delivery model compares to Design-Bid-Build (DBB), you have to look at the architectural phases of the project starting with programming.
Related Article