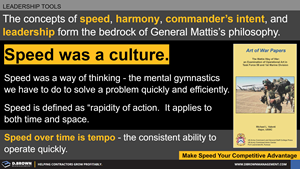 General Mattis and Making Speed Part of Your Culture

The concepts of speed, harmony, commander’s intent, and leadership form the bedrock of General Mattis’s philosophy. Make speed your competitive advantage in your career, on your project, and as a contractor. 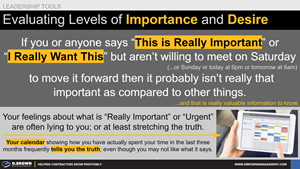 Evaluating Levels of Importance and Desire

Your feelings about what is "Really Important" or "Urgent" are often lying to you, or at the very least, stretching the truth. Your calendar tells you the truth, even though you may not like what it says. 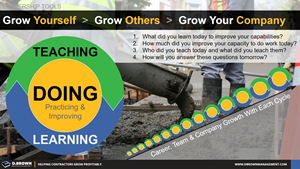 Growing yourself. Growing others. Growing your company. You will never achieve your full potential if you are not pushing your limits every day on what you are capable of doing. 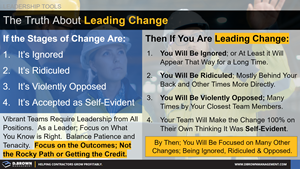 The Truth About Leading Change

Knowing the stages of change will allow you to lead through change more effectively. 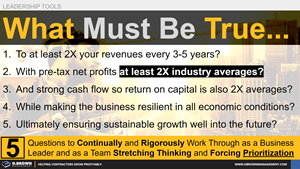 What Must Be True...

Asking the right strategic questions will ensure profitable growth in all economic conditions. Daily operational management is about adapting to what is currently true. Effective executive leadership creatively bridges the gap between the two. 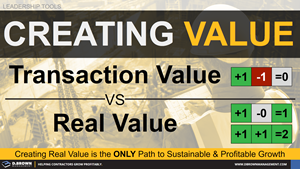 The difference between creating real value versus creating transactional value. Creating wealth and not just re-allocating it is the only path to sustainable growth. Understand the differences and how to incorporate them into your strategy and planning. 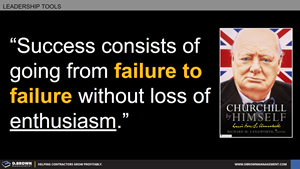 When there are no clear answers, it is critical to experiment, learn, and rapidly scale up those things that work. "Success consists of going from failure to failure without loss of enthusiasm." - Winston Churchill 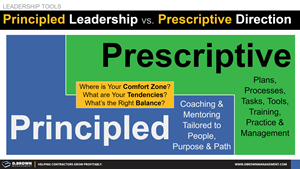 Where is your comfort zone? What are your tendencies? What's the right balance? Build more effective teams, projects, and construction business by understanding these differences in people and role requirements. 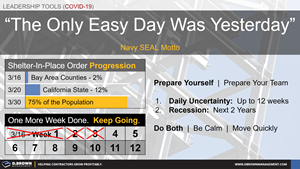 It’s the end of week 3 since the Bay Area was the first to issue shelter-in-place orders on Monday, March 16th. A few days later, on March 19th, California followed as a state, and by the end of that weekend another 5+ states followed. What's next? 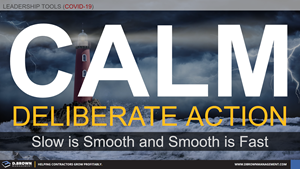 Slow is smooth and smooth is fast. This advice is invaluable when leading a team through a crisis. Calm and deliberate action is what's required, often from incomplete and conflicting information.