Technology innovation has always occurred at an exponential rate and has been starting to impact the $1 trillion construction industry at increasing rates.

In many cases we don’t recognize innovation that is happening at an exponential rate because the starting point is so small that we only start to see the growth when it reaches a tipping point. 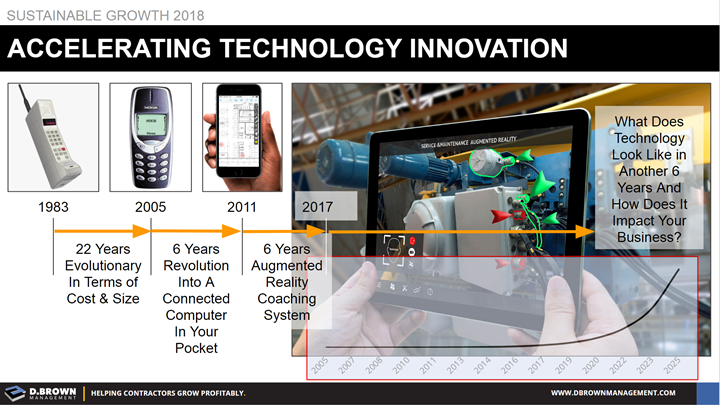 Consider the changes that that occurred just in the mobile phone between 1983 when Motorola released the first “Brick” phone until 2005 when Nokia “Candy Bar” phones were ubiquitous.  The changes during that 22 years seem evolutionary because the phone pretty much did the same thing with each successive version being smaller, lighter and cheaper.

Looking at the next 6 years and by 2011 contractors were starting to work collaboratively on plans with their mobile phones and now tablets thanks to companies like PlanGrid. Moving forward another 6 years to 2017 and you have augmented reality integrated with on-demand training being used in the construction industry.

Things are really starting to change quickly in the construction industry around technology.  What does 2025 look like? What about driverless vehicles? Automation? What is your team doing to put yourselves in a position where you have a competitive advantage or at minimum don’t lose your current position?

Fail nine times in order to succeed. The ability to accept failure as part of the learning process is just one of the great insights from: The Five Elements of Effective Thinking
Related Article

Look at every task and process including your business as a whole as developing in three major interrelated stages.
Related Article

Any incentive program should improve the operating execution, profit, and cash flow of the company. Aligning organizational objectives with the tangible value add to the craft worker in the field and operations staff workers yields the best results.
Related Article