Succession at All Levels

If a construction company is growing at 15% per year, then it will double in size about every five years. Therefore, in general, every position must be training at least two people that will be capable of succeeding them within five years. 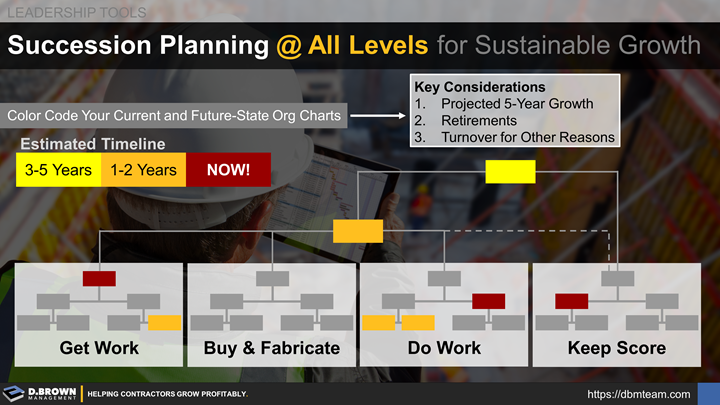 Remember that even if you are in a role like President, as the company doubles in size, your key responsibilities will have to be split into newly created roles in the company. You will need to be grooming others for those roles while considering succession in the future.

Don’t worry about over-investing and developing too many good people. We have NEVER been called in to help a contractor solve the problem of having too much great talent around and not enough work for them.

Looking strategically at your organizational structure and talent development is where an experienced third party can be very helpful.

Contracting is a very capital-intensive business and it is critical to constantly be watching cash flow performance. This metric is the highest level of an “OUTCOME” for cash flow at the project level, summarizing the performance of ops and finance.
Related Article

Some of the impacts you see on a project are not as clear as a design change, conflict, or obviously changed condition. Some impacts, such as poor project sequencing or congested work areas are hard to notice if you don’t have good tracking systems.
budget management change management foreman training project management project planning schedule management
Related Article

Zero to One - Advice From Peter Thiel

Construction as craft and as a business has been around for thousands of years. Contractors build and maintain the infrastructure that enables society to grow. That history comes a lot of pride. It also brings a lot of difficult to change habits.
Related Article