Succession - There is No One Best Way

When it comes to relatively simple and repetitive tasks like bending conduit or framing a wall, there is a “One Best Way” as described by Frederick Winslow Taylor, who is known as the father of Scientific Management.

W. Edwards Deming continued building on this with the PDCA cycle that has become a foundational part of the lean principles. 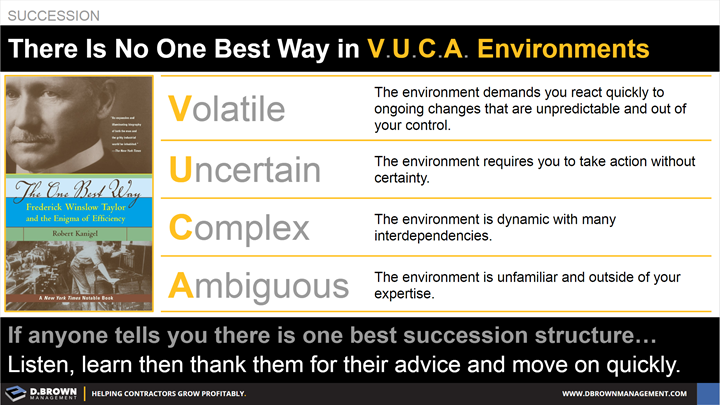 However, as systems become more complex (or V.U.C.A.), such as operating a company or succession planning, there is not a single “One Best Way” that will work in all situations.

As contractors that focus relentlessly on building efficiently, it is our tendency to want to quickly figure out that “One Best Way,” making us susceptible to advice that leans in that direction.

As you are selecting your third-party advisors, make sure to run quickly from those that insist that there is “One Best Way.”

Your focus needs to be on learning the multiple paths, understanding the pros and cons, then deciding on the path you are going to take up the mountain.

If you effectively manage the startup and the close-out of the project, then the execution in-between mostly takes care of itself.
Related Article

The first limitation most people and companies put on themselves is the size of their vision. While vision alone will not guarantee your achievement, a limited vision will nearly always guarantee limited achievement.
Related Article

All contractors are built on the same foundation, which starts with the amazing crafts people. With growth in the business, project size, and your career, the time you allocate to different layers of the pyramid must evolve.
career leadership prioritization sustainable growth
Related Article