Conceptual estimating requires a contractor to take early stage conceptual drawings and turn them into detailed estimates with a Work Breakdown Structure (WBS) that is useful during the initial programming, schematic, and design development phases.

It is important to remember that during these early stages, the developer is working to put together financing for the project. 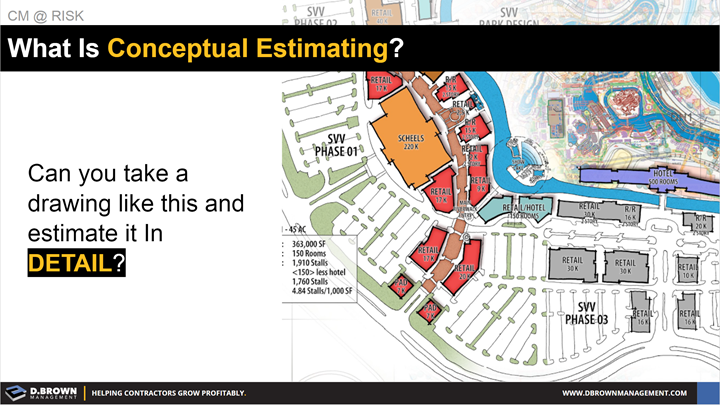 There is a lot of risk for all parties in a new development and as with any type of financing, banks are looking at the 5Cs with covenants, just a like a contractor has on their credit line.

The difference between a project moving forward or not is often in the single-digit percentage on cost and revenue projections. With construction costs being about half the total cost of the development, it is critical that the contractor can create a realistic budget even at this early stage.

The better a contractor is at this, the earlier and more often they will be brought into the process.

Clearly defining the outcome you want in clearly measurable terms is critically important so that you and everyone else knows exactly what winning looks like. As challenging as defining clear measurable outcomes is; that is the easiest part.
Related Article

If you perceive that changes are a problem in construction, then you are likely framing them as a point of blaming others. This framing will impact your ability to effectively manage changes.
business management change management foreman training leadership principles project management wisdom
Related Article

Everything truly important to the long-term success of a contractor comes down to building a strong team with a culture that supports each other; no matter what. Great leaders unite a team together and elevate everyone further than they could imagine.
Related Article