General Mattis and Making Speed Part of Your Culture

The concepts of speed, harmony, commander’s intent, and leadership form the bedrock of General Mattis’s philosophy.

"Time wounds all deals, sometimes even fatally." - Stephen A. Schwarzman 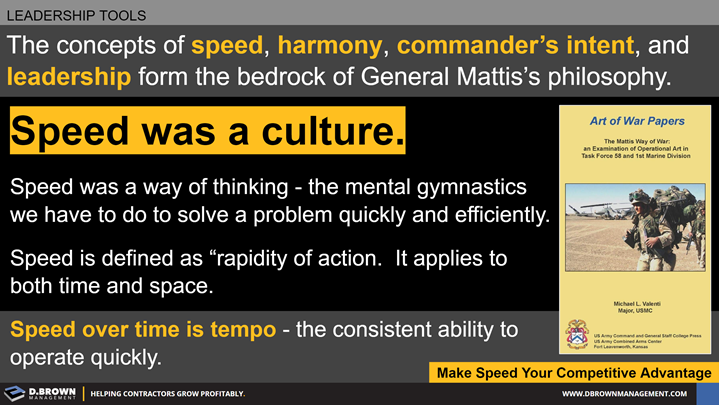 The Mattis Way of War: An Examination of Operational Art in Task Force 58 and 1st Marine Division

The concepts of speed, harmony, commander’s intent, and leadership form the bedrock of General Mattis’s philosophy. Make speed your competitive advantage in your career, on your project, and as a contractor.

Speed was a culture.

Thriving with a Difficult Manager

In the ideal situation, everyone would have a great manager - both internally and externally. In the real world, we will all have to work for someone we consider a difficult manager. Learn to thrive in these situations.
career leadership
Related Article

In times of uncertainty, the best strategy is to do everything possible to preserve your capital and ensure credit will be available as needed.
cash flow COVID-19 leadership
Related Article

While I am learning every day, it has been a very long time since I’ve put myself in the position of learning something completely new. That has now changed, as over the last couple of weeks of 2019, I learned to ski.
leadership self improvement talent development
Related Article