Raymond's unique perspective and approach has been developed over decades as an architect, general contractor, developer and owner's representative.

RAYMOND BRASWELL began his career as an architect then quickly moved into the construction side of the industry. Over a 20 year period Raymond built and successfully exited two large general contracting businesses. The first one he started from scratch as the President of a newly formed GC division for a large mechanical contractor ultimately growing it to over $400 million through securing clients such as Marriott and Disney Development Company. 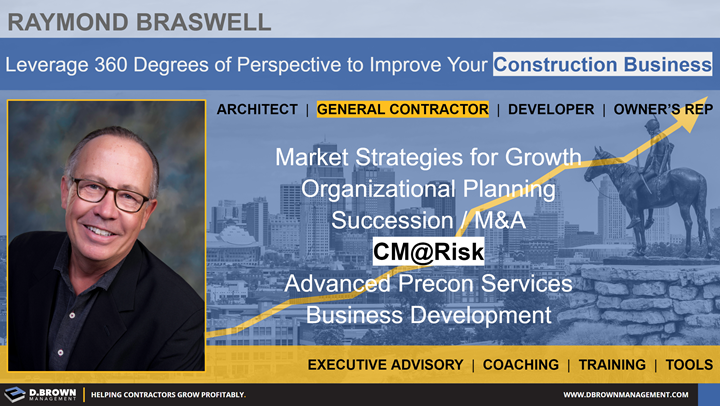 Raymond joined the second firm as President at $60 million where he quickly developed a growth strategy. By heavily leveraging preconstruction services combined with an innovative approach to talent management the business grew to over $900 million. Some notable achievements included the construction of a $285 million casino constructed in 14 months and exited the business through an ESOP.

After exiting his company Raymond spent several years advising real estate developers and large project owners. He improved their processes for interviewing then selecting Architects and Contractors for their projects.

Raymond now spends his time advising construction contractors across the United States on key issues including market strategy, geographic expansion, preconstruction services, business development and succession planning. Ultimately Raymond’s passion is setting a contractor up for long-term sustainable growth. Raymond’s unique perspective from his experience in architecture, construction and development can be an invaluable resource in assisting your company.

We provide a unique perspective and approach for General Contractors wanting to take their company to the next level of success....
Previous Next Go To Series
Related Insights Series

We provide a unique perspective and approach for General Contractors wanting to take their company to the next level of success....
Previous Next Go To Series
Related Insights Series

There is a lot more to success than being charismatic and extroverted with a perfect track record. The ghSMART company conducted research on over 2,000 leaders, correlating detailed notes from the candidate screening process with their results as leaders.
leadership organizational planning
Related Article

Can't Learn to Swim Without Getting Wet

Most everything we learn to do in the field for construction comes down to hands-on practice. When we move people into supervision and management roles we often forget the need to truly practice hands-on to get great at doing something.
Related Article