GE is facing some current challenges in the market however from 1981 through 2001 under CEO Jack Welch GE’s market cap (value) grew 18% compounded annually from $14B to $410B.

A large part of this profitable growth was due to the rigor placed on their talent development processes directly from the CEO. 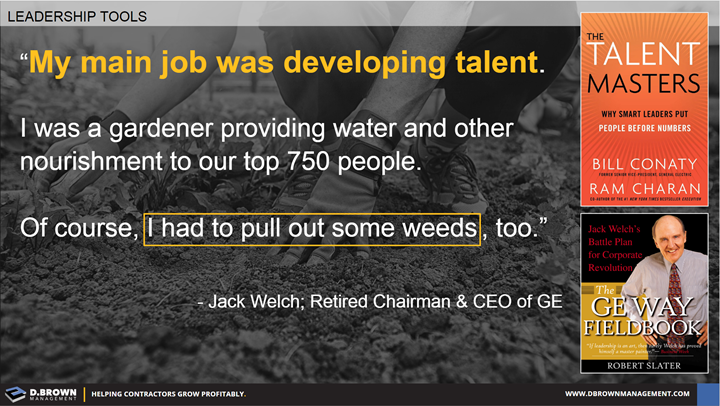 Even in the early years of his tenure while having to cut expenses in many areas Jack Welch invested heavily in expanding GE’s talent development programs.  Many of these philosophies, tactics and tools can be used by contractors:

Talent development is difficult and requires making some very tough decisions.  It is the contractors that build robust talent processes today that will dominate tomorrow.

By leveraging preconstruction services, contractors can gain a significant competitive advantage. This chart ranks the impact of precon across the basic project delivery methods and four basic dimensions:
Related Article

Changes are a part of the construction process with many underlying causes. While we have all heard the average of 10% changes on construction projects, it is interesting to look at an industry study for validation.
change management foreman training project management
Related Article

A Business Exists to Serve a Customer

Without satisfied and growing customers, nothing else a contractor does will matter. Few things are more profitable for contractors than recurring work negotiated with a select group of project owners.
leadership principles sustainable growth wisdom
Related Article